Tips to take charge of your vocabulary learning 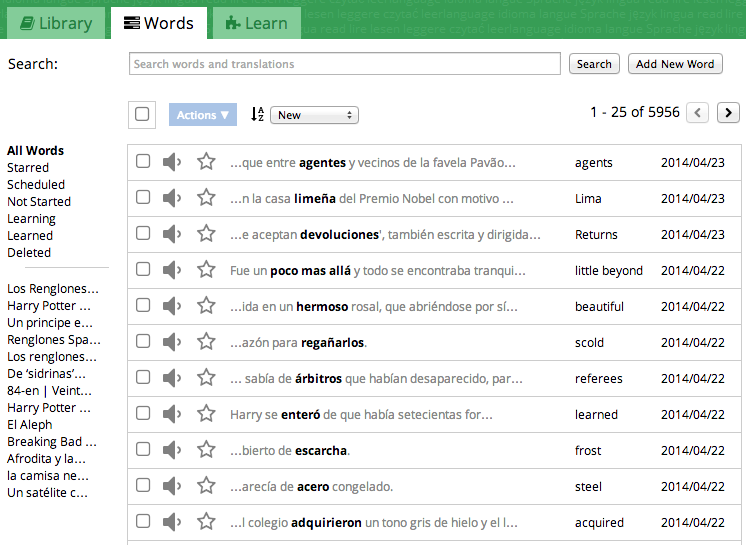 This is a flexible tool to manage your vocabulary, whether you’re a hardcore language geek or simply looking for new ways to speed up your learning. Bear in mind that none of this is necessary to use Readlang, which you can very happily do using only the Library and Learn pages. The Words page is a great addition for those who want to take a more hands-on approach to their vocabulary learning.

Here are some useful tips for making the most of the Words page:

Are some people naturally better at learning languages?

I just read a fascinating article about the development of Hi-LAB, the “High Level Language Aptitude Battery” test designed to help the US military identify individuals with high language learning potential. It was borne out of a frustration with seeing so many language professionals getting ‘stuck’ at basic proficiency and not progressing to become fluent. After some research, CASL (Center for the Advanced Study of Language at the University of Maryland) concluded that the following three traits were linked to language learning success:

By default, Readlang will select flashcards for you to practise which are useful, high frequency words, and are scheduled for review according to Readlang’s spaced repetition algorithm.

But what if you are focussed on a more specific goal? Perhaps your job or studies require you to learn technical terms, or perhaps like me you’re working your way through Harry Potter and would like to restrict your study to those books. I’ve recently added a new feature for Readlang Supporters that allows you to choose to study words from any text from which you’ve translated 10 or more words or phrases, for example: 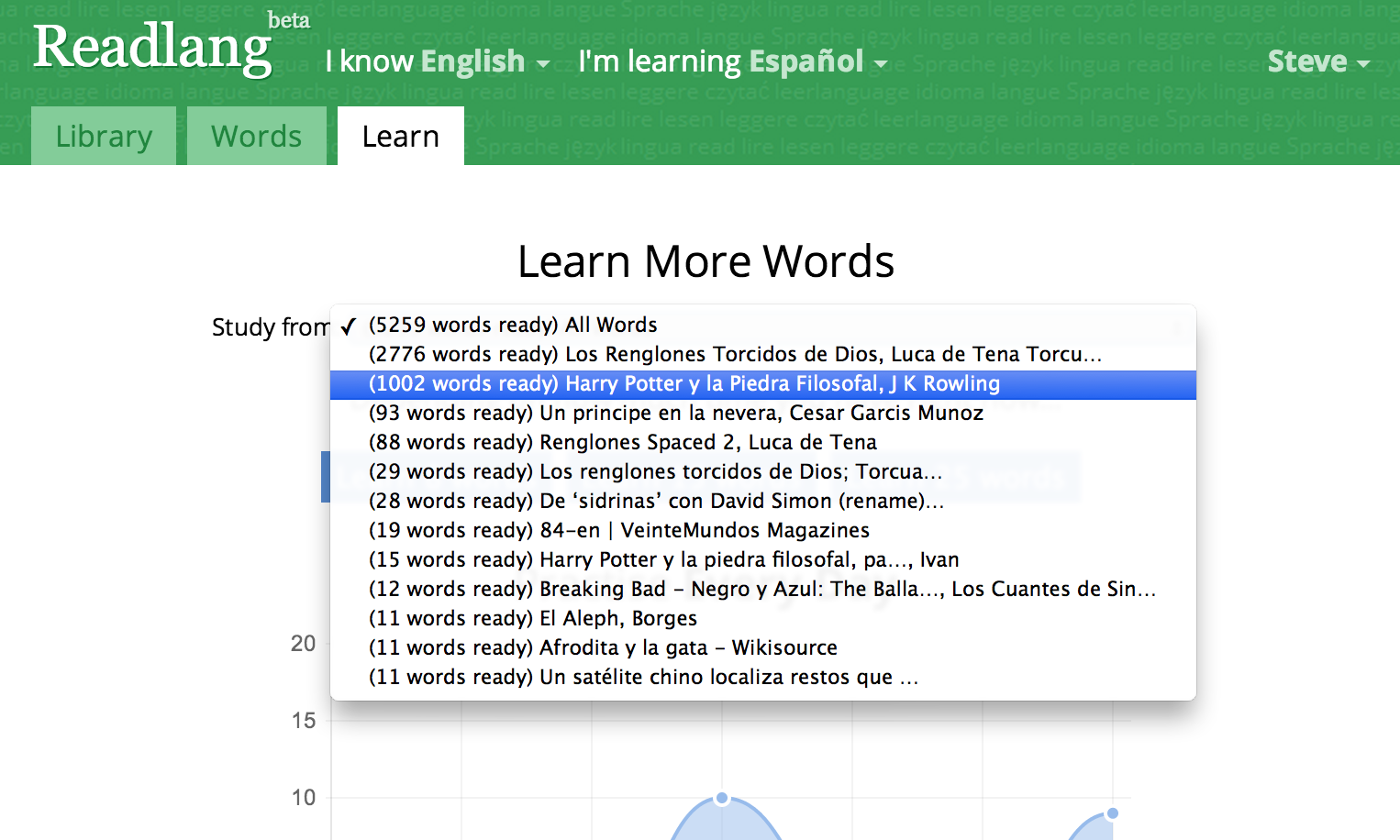 The Making of Readlang - The First 16 Months 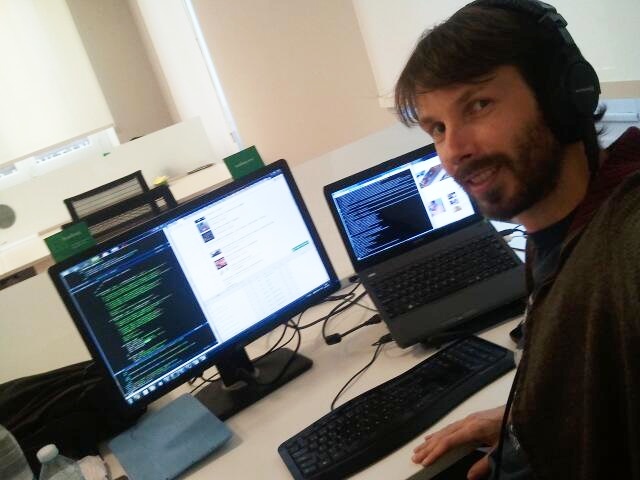 It’s been 16 months already. In that time the site has grown from nothing to almost 5000 users, and continues to receive awesome feedback and grow ever more quickly. But it’s not all roses. There’s a long way go to make this sustainable, and I’m very motivated to keep battling on and making it happen! 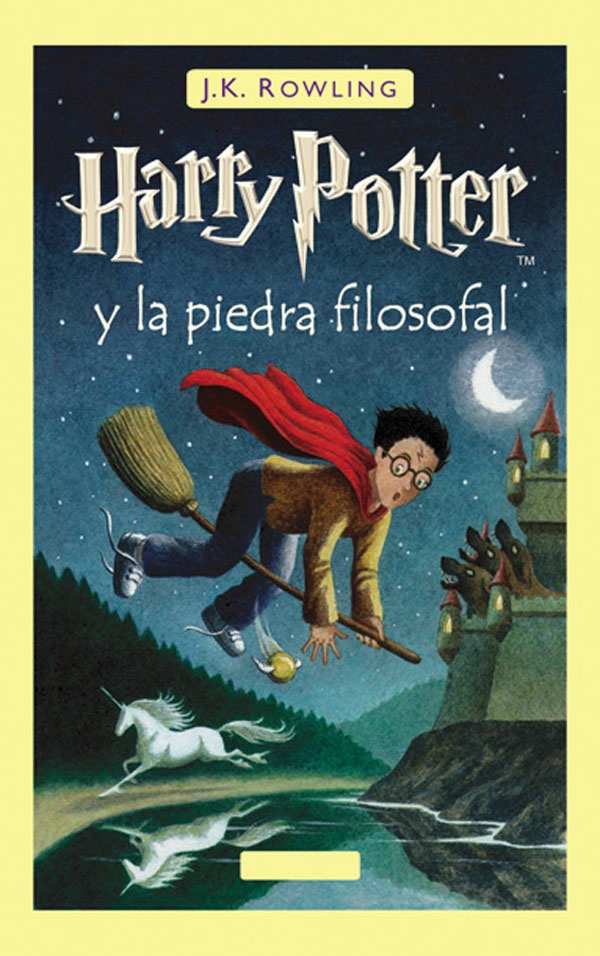 A failing of most language courses is that their content is so boring. It’s hard to stay motivated reading stories like “John goes to the supermarket”, I want to read about epic adventures, with drama, mystery, and wizards!

That’s why I’m so excited that the Harry Potter e-books are available to buy DRM free, ready to import into Readlang and help learn languages!

If you’re stuck looking for the right word, does it drive you crazy? Do you pound your head on the table trying to remember it? Do you swear you’ve learnt this before? If only your brain would work! Just think dammit! Think!

There are two problems with this:

Fed up with flashcards? Try other word games for language learning

Flashcards are effective, but let’s be honest, they can get a little boring. That’s why I created an API for Readlang allowing any web developers to create games which you can then play with your personal words and phrases.

I encourage you to use the normal Readlang features with your class instead.</a>.

Are you a foreign language teacher? Would you like to encourage your students to read more?

You can now create reading assignments on Readlang, and track your students progress to see where they need help.

Learn Japanese and Chinese by Reading

Finally Japanese and Chinese are available to learn on Readlang!

They work just like the other languages except that you need to drag across individual characters to select the words yourself. The reason is that languages without spaces between words make it very difficult to detect them automatically.

Please give it a shot and let me know if it’s useful or not, if you’re not sure where to start, this video may help: Readlang Tutorial

If you still have questions, please get in touch, I’m always ready to lend a hand!

I started Readlang exactly a year ago today. At the time I had no idea I’d still be working on it a year later!

Here are some fun statistics on how you’ve all been using Readlang:

I’m excited about what improvements I can make in the following year! Stay tuned!

It works exactly like the current Web Reader Bookmarklet except it integrates nicely into the Firefox interface.

Once installed, you can access it on any web page by either:

Please let me know if you encounter any problems.

UPDATE: The Firefox Extension has been rejected from appearing on the Mozilla Add-on gallery since it updates itself automatically which they don’t allow due to security concerns, so if you want it just download and install it here.

You can now type your answers into Readlang’s flashcards! This has been on the cards for a long time, and after getting addicted to the amazing Duolingo recently I knew it was time to add it to Readlang.

To enable this, first enter the preferences page: 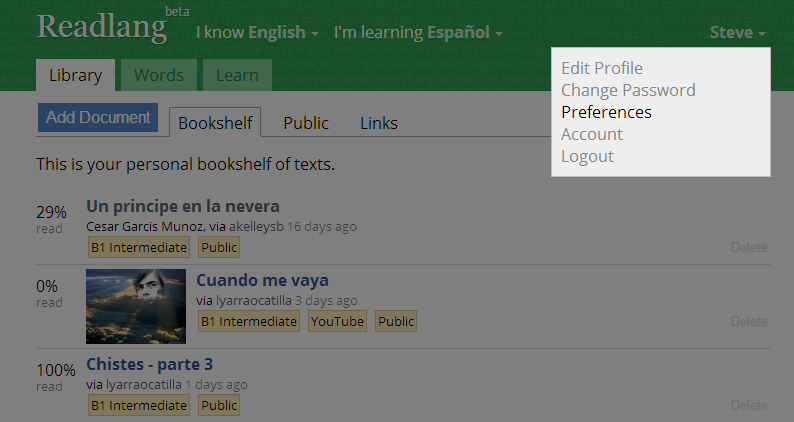 Now, the flashcards in the Learn tab will ask you to type your answers in the language you are learning (but not in your first language):

I’ve been testing it myself and it’s so much more rewarding to type the answer and get told if it’s right or wrong.

If you get frustrated for getting told an answer is incorrect, when it is actually a different correct answer, it can help to edit your translations to be more specific, e.g. instead of translating the Spanish word “este” as “this”, use “this (male)” to remove the ambiguity. This isn’t always enough however and I do plan to allow multiple alternate answers in future.

UPDATE: I’ve now added the ability to add alternative answers. When you get a question ‘wrong’, a button will appear allowing you to accept it as a correct answer.

Another feature I’ll probably add is an on-screen keyboard with the special characters which are difficult to type without altering your OS settings. For now, I recommend finding out how to alter your keyboard layout on Windows, Mac or Linux and try learning to touch type in the language your learning, that’s what I do for Spanish and it’s far faster than reaching for the mouse half way through a word.

UPDATE 2: There is now an on-screen keyboard for the extra characters in each language.

Please let me know if you enjoy the typing mode, or if you prefer the old one.

Don’t like the current sidebar dictionary? Or is it missing for your language?

You can now put whichever dictionary you like in Readlang’s sidebar.

Your chosen dictionary will now be available in the Readlang sidebar: 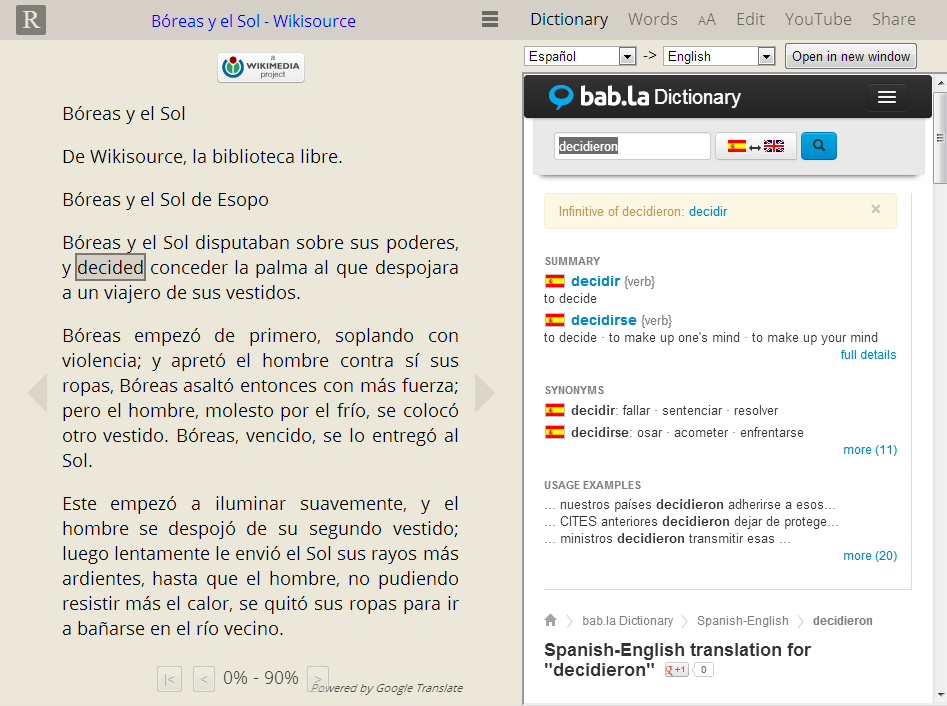 I’ve jumped on the bandwagon and added voting to documents. It works much like Reddit and my hope is that if enough people share and vote it will provide a good stream of quality new content for language learners to read. 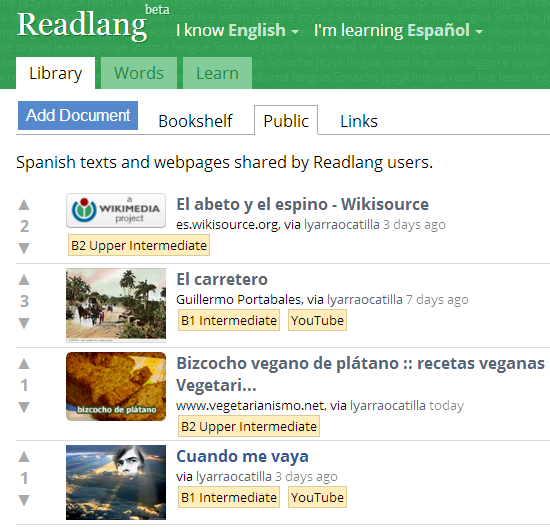 As well as Readlang texts, you can also vote on any web page directly using the Readlang Web Reader. 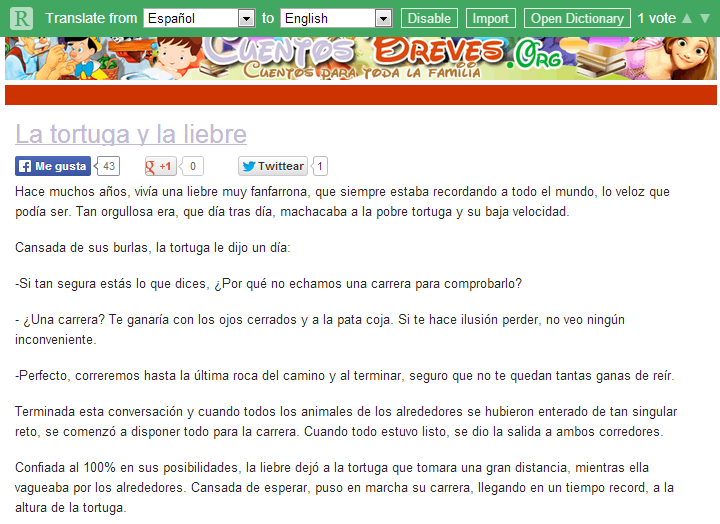 PS. Thank you to the users who have been sharing content, especially the prolific lyarraocatilla!

Readlang uses the great WordReference dictionaries where supported [1], and recently I’ve been adding some other dictionaries to fill in the gaps, namely:

Thanks to the users who suggested each of these! 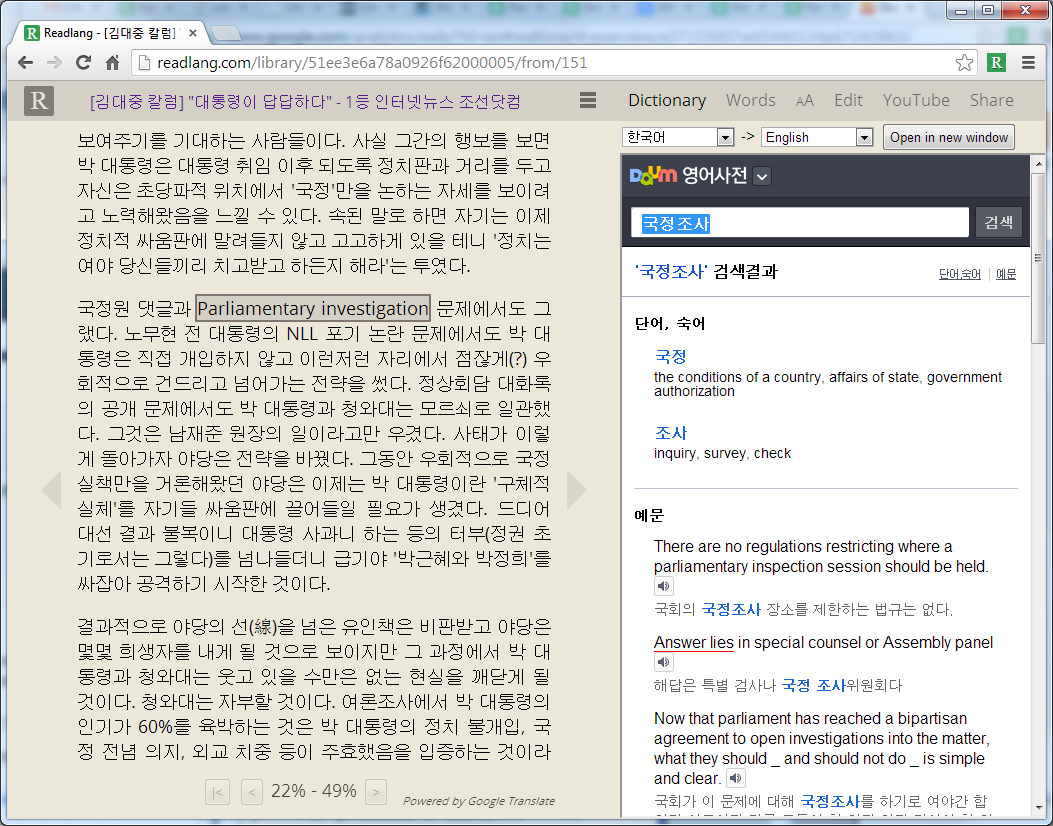 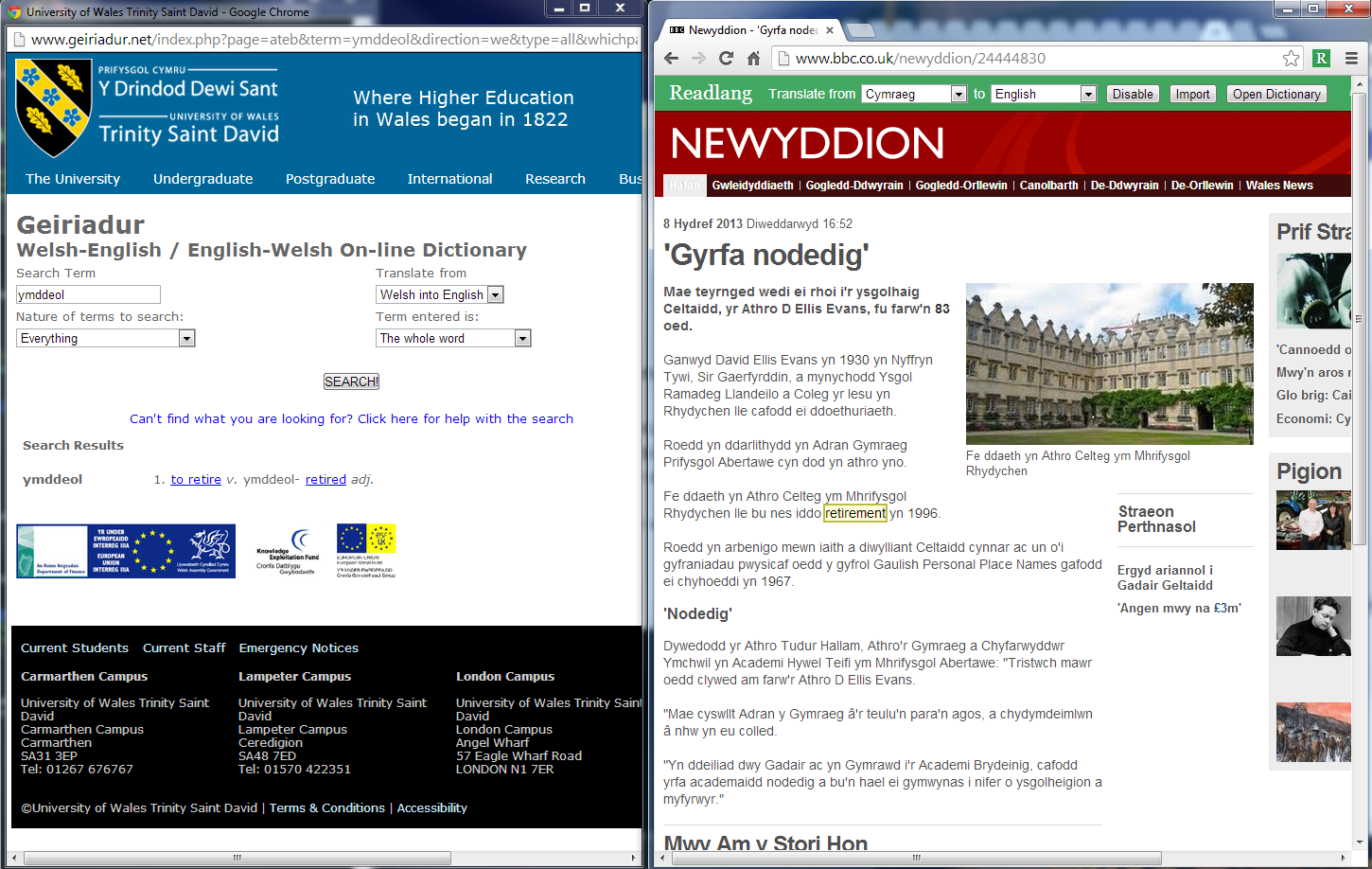 If you have suggestions for dictionaries for other languages, or if you have better alternatives for any of the current ones, please leave a comment below.

[1] Languages with WordReference dictionaries in Readlang: