Yesterday I uploaded a playlist of tutorial screencasts:

It starts with basic usage of the site, but the 4th video is more advanced, demonstrating how to create synchronised YouTube transcriptions yourself.

I hope you find these useful. I plan to add more in future, and to update them as Readlang improves. If there’s anything specific that you find difficult and would like explained, please let me know.

I’m working on a feature that isn’t 100% complete but is too good not to share :)

It’s the Readlang Web Reader, and offers the same swipe-to-translate function as the current Readlang reader, but this time it works from within any web page. Check it out… 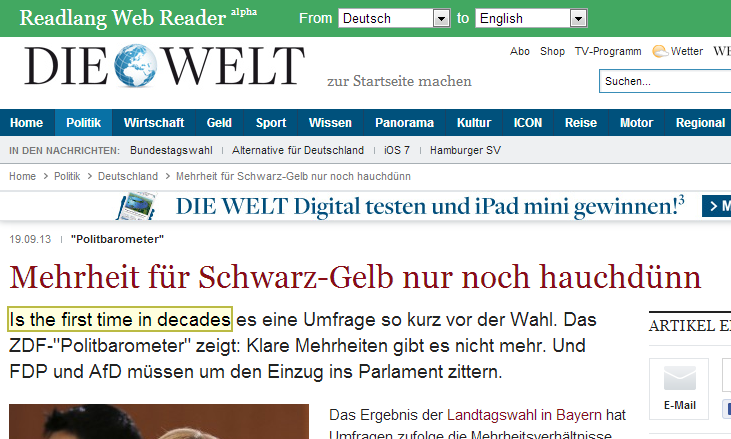 Your words and context sentences are saved to your Readlang account just as if you were translating a normal Readlang text.

If people like this I have plans to improve it by adding a sidebar dictionary, and integrating it into the Chrome Extension. What do you think?

As always, please report any bugs or suggestions!

UPDATE: The Chrome Extension now opens the Web Reader exactly like the above bookmarklet.

This is how Readlang used to work:

This approach works fine if you want to do exactly the same number of flashcards, every single day. If you neglect them for a few days two bad things happen:

And if you go crazy and one day decide to increase your limit and pump lots of new words into the system, you’ve just guaranteed an unmanageable work load for the next couple of weeks. Think about what this does for motivation, instead of getting rewarded for learning more you get punished.

How important is that number of “Scheduled for today” words anyway? After all the distiction between “Scheduled for today” words and “Not Started” words is artificial, they are all words that you want to learn, so if you have entered 2382 words into the system it may as well say “Learn (2382)”, which is ridiculous. The number only serves to guilt you into doing your flashcards.

This is a common problem with SRS systems, and it can lead to disillusionment. It’s still a great method and if each word was equally important, then clearing your backlog first makes sense, but every word is not equally useful and so I think there’s a better way.

The new system is designed to fix these problems: 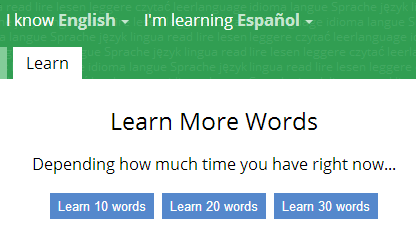 The underlying SRS is still the same, but now it now:

I hope you enjoy it!

PS. I'm currently working on an open API to allow others to create apps and games using your words in Readlang, stay tuned!

Readlang already uses word frequency lists to prioritise the most useful words in a language first. Now you can override this and bump your favourite words to the top of the list by starring them from the words page: 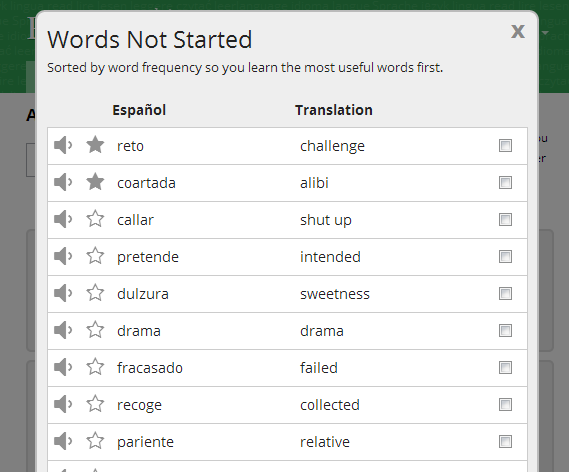 You can also star them from the sidebar in the reader page: 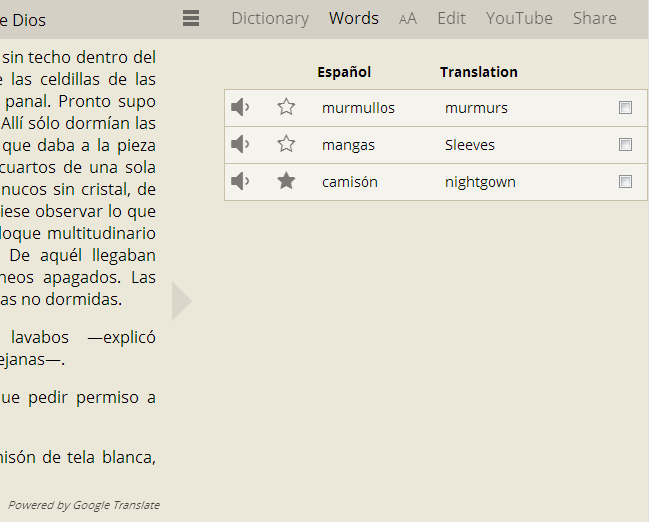 These words will appear as flashcards in the learn page before others in your “Not Started” list.

Now, if you translate the same word multiple times, Readlang will:

e.g. Here I’m editing the word “tras” which has been translated in two different contexts. 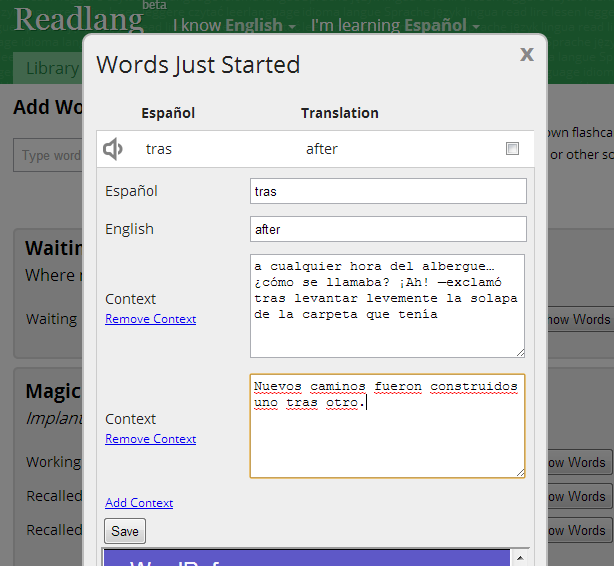 While doing my flashcards, I sometimes notice another word I don’t understand, apart from the one on the card. Now the contexts are translatable by clicking just like full texts, and doing this will generate new flashcards for those words if they don’t already exist.

People seem to like Readlang’s phrase translate feature, but having to click on each word separately was a bit tedious. Now a simple click and drag, or tap and swipe, will translate an entire phrase in one fell swoop: 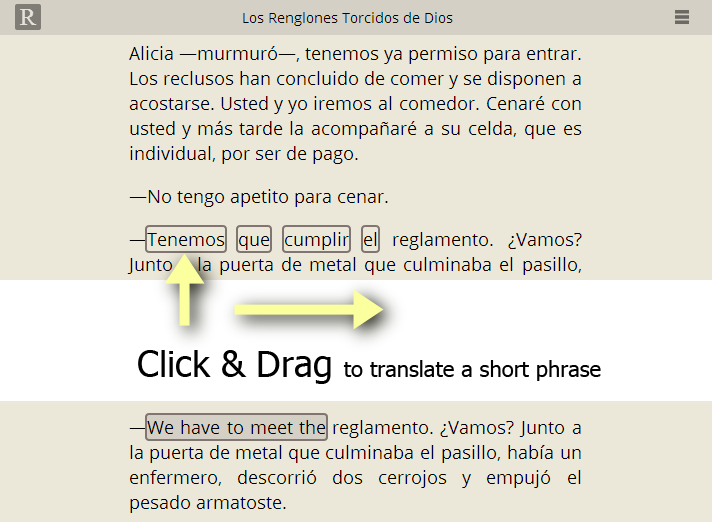 What used to be complete drag, is now a simple… well, drag. (sorry!)

The phrase translate feature has proved very popular. But some people have been using it translate whole sentences, which wasn’t really it’s intention, so to keep my Google Translate bill under control, I’ve limited the phrase length to 8 words maximum.

Also, as people continue to sign up for the beta, I need to ensure that the site is sustainable. To this end, phrase translation will be restricted to only 10 phrases per day for all new users. Or, for only $29.99 / year or $9.99 / 3 months, you can become a Readlang Supporter, which lets you:

This will allow more people into the beta test without endangering my finances. Even in it’s beta state Readlang has proven itself a very useful learning tool for myself and many others, I hope it will for you too.

I’m excited to tell you about two new features.

You can now edit any book or article that you imported to Readlang. Just open the Sidebar and go to the Edit tab: 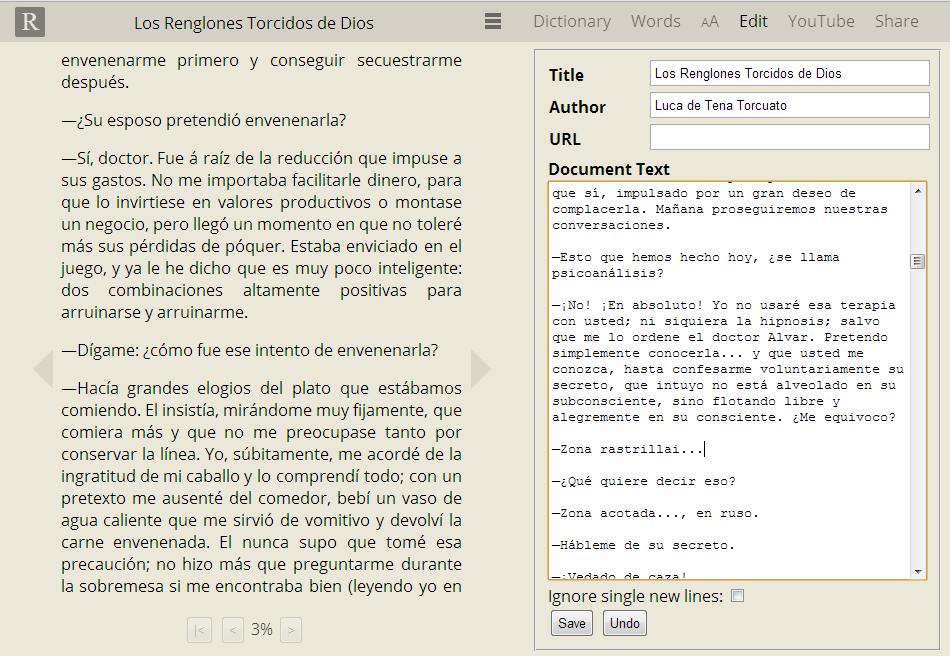 Why keep your perfectly edited documents to yourself? Share interesting articles with your friends or students from the Share tab in the sidebar:

Articles shared here will appear in the Library tab for the appropriate language.

I’d like to make the public library the best place on the web to find articles and links for language learners. Here are some ideas I’m considering:

Here are a bunch of popular language learning websites:

Notice a common thread? They all re-implement their own spaced repetition system and all except for LingQ1 don’t share their data2. This means if I’ve invested time with one tool, there’s a resistence to switching to a new one. And the experience I have with a new tool will be inferior until it learns about me.

Imagine if all these tools backed onto an open learning platform which stores your progress on each word or concept. You could encounter a new word on Duolingo one day, test yourself on it with flashcards in Anki the next, then encounter the same word in an iPhone game the next day, and all these events would contribute to the same user profile. New apps would hook into this data to provide you with a personalised experience from the start. Wouldn’t that be awesome?

Of course, getting all the existing sites on board with this is a tough proposition. But if this existed and got a bit of traction, users would demand that new language learning tools or games use it.

I’m not sure exactly what it’ll look like but it should provide an open standard API to:

I predict that one day an open platform like this will exist, and an ecosystem of connected language learning tools will emerge.

</small> (PS. As for how these ideas may affect Readlang, I’m not exactly sure yet, but stay tuned!)

Today is exactly 6 months since the first lines of Readlang’s source code were written:

And the idea to make the site was only born a couple of days before that, so it really is a half year old. I was living in Spain and frustrasted with my progress in Spanish. At the same time, I was keen to start a new programming project, and Readlang seemed a natural fit. I’d code the site by day, and in the evenings I’d test it to read books and learn Spanish, perfect!

I got a reader prototype up and running pretty quickly, and I was reading a novel with google translations within the first week. The site’s come a long way since then. I wonder what it’ll look like in another six months time…

There’s a new feature on the site. It started life as plain audio to listen along with texts but got ‘upgraded’ to YouTube instead, for three reasons:

I still think that plain audio would be cool to have, but this lets me get something out there that works, and get back to improving the more core aspects of the site.

You can try it out by watching the following videos in Spanish: 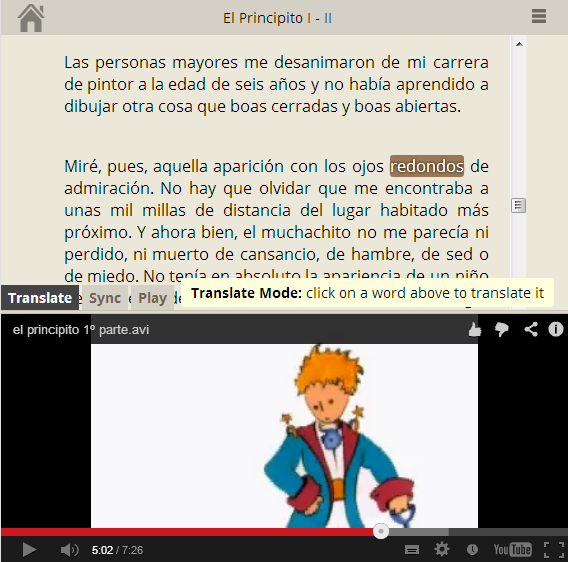 Yesterday the 200th Readlang beta tester signed up. A modest number but it keeps me motivated, so thanks to all of you, especially those who are using it regularly and providing feedback!

I’m working on an audio feature now that I’m very excited about. Will share more details when it’s ready.

I introduced readlang on the How To Learn Any Language forum recently and have received some useful feedback. I’ve implemented two of the suggestions already.

Readlang got an awesome new feature today, it now prioritises words by their frequency.

This means I get to learn the most useful words first, which is important since I have over 500 words sitting in my queue: 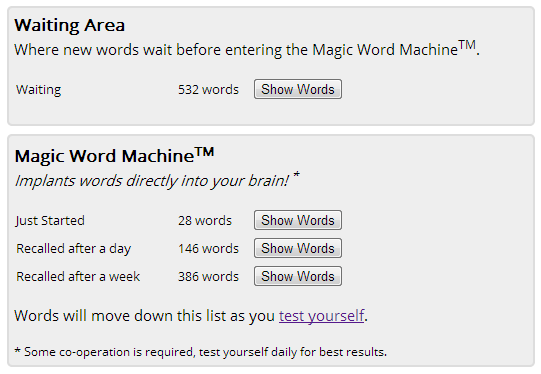 Thanks to Hermit Dave for his list of word frequencies which made this feature so simple to add to the site. The only language missing is Catalan, sorry!

Update. The video below is out of date, here is the latest version.

I’m still busy working on the site and have made a short screencast to introduce the basic features.